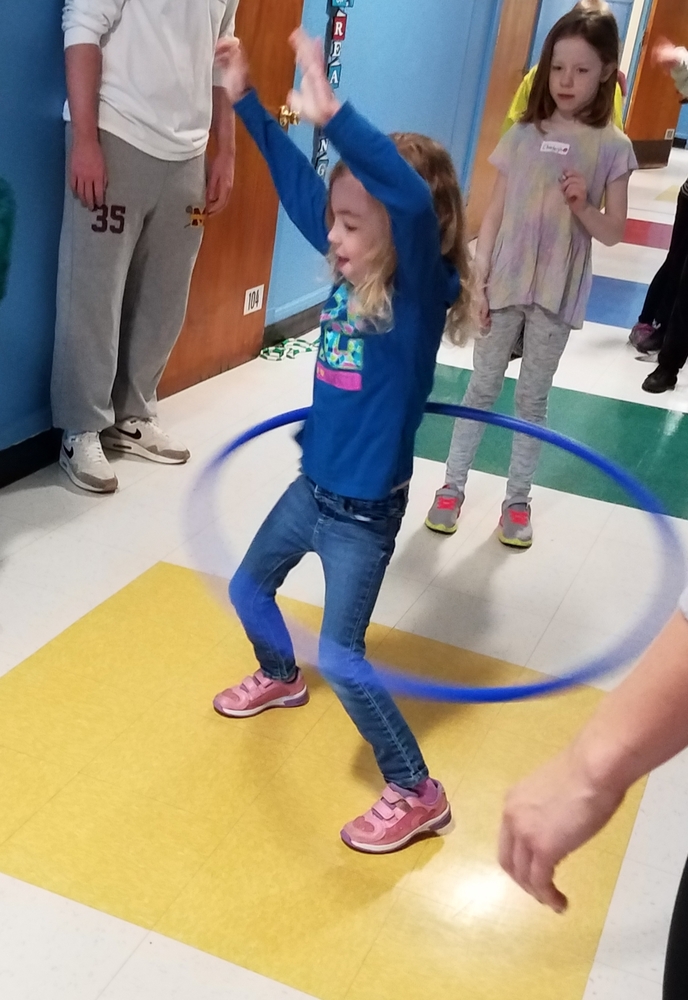 From January 29 through April 11, students at the Viola Rand School have enjoyed an extremely well or-ganized before school exercise program. This pilot of a Reeboks sponsored program to get kids moving and improve their focus and engagement in class. Sam Lenson, a grad student at the University of Maine in the Admissions Department, was passionate about bringing this opportunity to students in this area. BOKS originated in his home town in Massachusetts, so he had a strong appreciation of the benefits. The Viola Rand School was chosen to be the pilot site due to the arrival time of most students and the man-ageable numbers. We ended up with 98% of our students participating and the ones were who were un-certain about doing it in the beginning sport some of the biggest smiles now. The first thing Sam needed to get this program up and running was a dedicated crew to show up at the school three mornings a week at 7:00AM. He recruited four amazing education majors– Estella, Carigan, Maggie and Bailey who have been remarkably committed and wonderful with the elementary school students. Sam has been training them to hopefully take on a school of their own and do his job of scheduling and planning. They have all been planning and managing activities throughout this program. On April 18th, they will all be recognized at a Banquet for Volunteers at the Buchanen Alumni House.
Sam was a football player at UMaine and used his connections in the athletics department to recruit guests to the program. Usually twice a week, University students representing different teams and groups came to help run activities and encourage kids. Football, cheering, hockey basketball, Senior Skulls, and several sororities and fraternities participated. They were all amazing ambassadors for their respective groups! Sam also had support from his professors and mentors from his undergraduate classes in PE and Kinesiology. They visited and provided feedback.
On the final day of BOKS, VRS staff provided a breakfast to show our appreciation for the commitment and integrity the coaches all showed. Each of the coaches also received a “Small School...Big Foot-prints” tee shirt and Sam got a VRS hoodie. There were actually a lot of tears and emotions. Some won-derful relationships were forged over the last three months. This would be a tremendous program to ex-pand into other schools! VRS has had a terrific experience with it!!