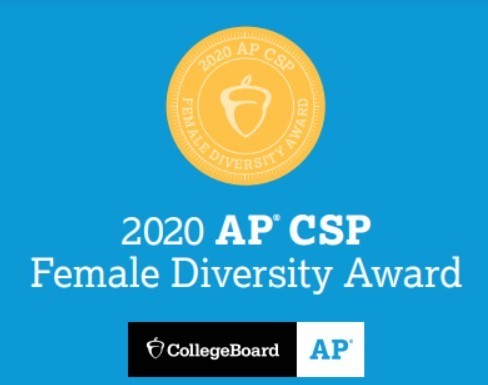 “During an unprecedented year, OTHS students have demonstrated perseverance and dedication in their study of AP Computer Science,” said OTHS Principal Scott Gordon. “We could not be more proud of OTHS students for staking their claim as the next generation of STEM and computer science professionals. We can’t wait to see their passion for next generation technology lead to lifelong success.”

“Old Town High School’s students need the power to shape technology, not just cope with it,” says Stefanie Sanford, College Board chief of global policy and external relations. “Young women deserve an equal opportunity to become the next generation of entrepreneurs, engineers and tech leaders. Closing the gap in computer science education empowers young women to build the future they want.”

These findings make it all the more imperative that schools nationwide achieve gender parity in AP Computer Science classrooms. The 1,119 schools that receive this year’s AP Computer Science Female Diversity Award should serve as inspirations and models for all American high schools, where overall, female students remain under-represented in computer science classes, comprising just 34% of AP Computer Science Principles participants. So there is a long way to go to achieve equal gender representation in the field of computer science. Currently, less than half of the nation’s high schools teach foundational computer science, a clear opportunity to be addressed by strong partnerships between policymakers, the tech industry, and educators.